ABOUT THE PHOTOGRAPHER LARRY HULST 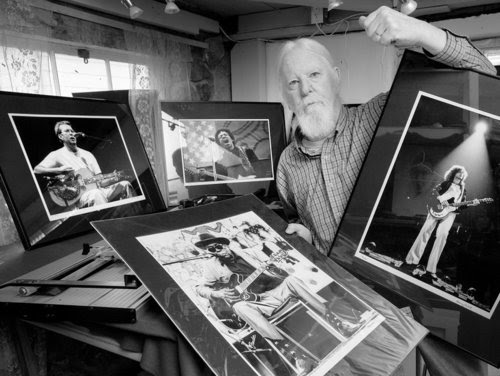 Born in 1946 in San Diego, California, Larry Hulst is a loyal participant in the concert scene. His collection of nearly 3,000 black and white negatives have framed influential musicians spanning five decades of rock history. “When I first started I couldn’t afford film,” Hulst shares, “so I walked around Sacramento with an empty camera, just trying to learn how to focus.” His career began in 1969 when the former Navy corpsman returned home to Sacramento after a tour of duty in Vietnam.

Citing Jim Marshall, Ansel Adams and Lynn Goldsmith among his influences, Hulst is fueled both by his respect for his musical heroes and his dedication to improving his photography. His first experience of a high energy performance  at the Shrine Auditorium in Los Angeles in 1967 hooked him to be front row center for the rest his life capturing the performances of a lifetime. The hallmark of Hulst’s instantly recognizable work is the authentic ability to depict the raw energy and emotion of the concert experience. The only prop he ever needed was the stage. “ I never wanted to go backstage,” Hulst states, “I wanted to be where the action is. After all, the ‘show’ is projected out onto the audience. I wanted to be in the attendance.”

While building his anthology of iconic rock imagery, Hulst honed his craft at less manic venues. For 27 years he worked as a US government photographer. Hulst’s lens caught military activities by day and rock stars by night. His work covered the gamut of Defense Department activities at two Air Force bases, as well as the US Air force Academy. He retired from civil service in 2010, living in Colorado Springs, Colorado with his wife of 40 years, Laura.

Now it’s Hulst’s work that projects to an audience as depicted in his images of The Who. His concert photography has graced the pages of Guitar Player, Rolling Stone, and Time magazines, several biographies, and numerous books. Art directors for  Led Zeppelin, Eric Clapton and Bruce Springsteen chose Hulst’s photography for album art.  His image of Jimi Hendrix adorned the terminal walls of Los Angeles International Airport. Larry Hulst remains a mainstay at concerts and live music events today.

Hittin’ The Note TXM Museum of the Southwest, Midland TX